The intersection between the corporate and medical worlds is, I think pretty fascinating. I’ve been exploring some work in corporate wellness recently and have previously written about the potential sale of medical data by the UK government but I came across something new (to me) recently;  the profiling of doctors by pharmaceutical companies.

What I find particularly interesting about these categorizations is the interpretive element of them which qualitatively establishes connections between a quantitative and administrative category, the  personality characteristics of the doctor and their potential to be swayed by sales tactics of a medical rep. One category which has been developed by a company is “the 55-year old family doctor with a large practice” who is “sensitive to the humanist approach to the patient”. I would guess that most doctors are sensitive to a humanist approach to patients so I assume what they refer to is that doctors in this category are more likely to be swayed into purchasing pharmaceuticals by emphasizing “humanist” concerns than a more “scientific” doctor (I got all of this information from an article in Le Monde Diplomatique, sadly paywalled)

It is interesting to consider this in relation to the reported decline in the relationship between medics and pharmaceutical reps which is claimed to have peaked in around 2007. The reason for the decline has been at least partly laid at the door of critiques of the ethics of big pharma. It is, then, perhaps unsurprising that doctor profiling has been used for at least the last fifteen years in order to better target those who will be receptive to the advances of reps. One report suggested the use of such methods can increase prescription rates by 30% and profits by 3%. More recently it has been reported that visits from medical reps to GPs have fallen from 77 to 55% but a quarter of their marketing budget is now in digital.

This marketing is driven by data crunched from electronic health records, medical apps and social media applications aimed at doctors. It is social media which has proven particularly useful with platforms providing space for doctors to connect, interact and share experiences. Also companies sponsor aspects of sites and some, such as Sermo, pay users to read and assess articles on products. Other companies also mine data from, Facebook and Twitter to discover the influential players in networks and identify opinion formers.

Social media applications have proved particularly useful in overcoming the lack of trust doctors have in pharmaceutical companies. For instance, Doctors.net.uk is an online professional network which is visited by a third of all UK doctors every month and who sell credibility to advertisers. Research, conducted by Doctors.net.uk has shown that while pharmaceutical websites have very low levels of credibility amongst doctors, independent sites such as their own are second only to peer reviewed journals in the credibility stakes. 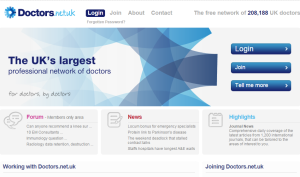 Doctors.net.uk also provide data analytics to pharma companies which help them to target more effectively; they claim that their “behavioural measurement”:

“…is so detailed, Doctors.net.uk can even identify GPs whose online searches or digital education history point to a particular interest in asthma, as well as those doctors who are easier to identify in this regard by nature of their job title or declared clinical interest.”

They also offer advice as to how to target those doctors who do not tend to engage with pharma companies:

“For example, an e-detail or a more educational style resource can be used as a substitute for face-to-face pharma sales rep activity alongside educational service calls and/or tele-reach; or to broaden reach to target ‘low see, no see doctors’ in combination with service calls and tele-reach.  By optimising and integrating activity in this way, pharma companies can maximise ROI from their online resources and deepen engagement with doctors”

But perhaps most significant of all is the trust which can be rub off onto big pharma:

“One of the key barriers to online engagement is lack of trust. Doctors.net.uk helps pharma companies to overcome this problem since it is one of the most trusted resources for doctors. It also helps pharma and other healthcare companies measure such engagement in a positive way.”

The sociology and history of classification has shown that categories are rarely innocuous, purely descriptive phenomena but usually construct reality on some level. I wonder, has there been any research on profiling of doctors? Has it looked at the interaction between commercial forces, their profiles and whether this impacts on how doctors are seen in the profession or by themselves?